Best practices for integrating DevOps into your organization

DevOps is a mature and popular set of practices that continues to grow and gain new fans among small and large organizations. According to Global Market Insights, the size of the DevOps market exceeded $7 billion in 2021 and is expected to reach more than 20% growth between 2022 and 2028.

Not everyone is familiar with DevOps, and many are intimidated about implementing DevOps ino their company. If this is you, read this article to learn more about DevOp best practices, plus some tips for implementing it in your business. 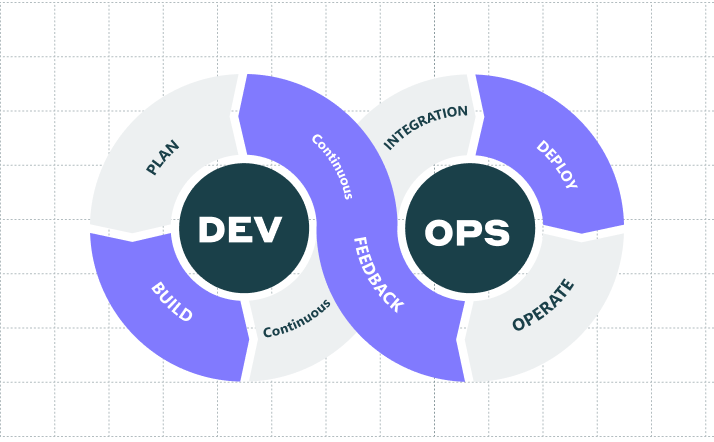 As you probably have guessed, the term “DevOps” comes from a combination of two words: “development” (Dev) and “operations” (Ops). It describes an organizational methodology for improving communication and collaboration between development and operations teams. This often leads to increased productivity within a company.

DevOps organizes work in large teams while allowing faster software deployment delivery. It works based on an iterative work model, in line with Agile principles.

As a result, code is created in small iterations and released as quickly as possible. This practice applies to new software and adding changes and updates to the existing one.

The idea behind DevOps is to create a process that anticipates problems and enables developers to respond to them effectively.

This means that DevOps release management focuses on providing an IT team with immediate feedback on each deployment to detect possible bugs and fix them quickly. Software developers can then constantly experiment, compile, release, and try new ideas.

An integral part of DevOps is process automation, such as test or deployment automation. This can have a significant impact on team productivity, and relieve the team from time-consuming and monotonous tasks.

Why did companies start implementing DevOps?

DevOps was mostly developed in large companies that have noticed losses associated with a lack of coordination and collaboration between development and operations departments.

The main goal of DevOps is to create a culture based on shared responsibility, transparency, and providing feedback. As a result, the team can quickly and effectively solve problems and act as a good team.

When working in DevOps methodology, all team members share common goals, know the priorities of a project and work together to achieve them.

Working along the lines of DevOps, IT teams can release good-quality code fast.

According to the 2019 State of DevOps report, teams that use DevOps release their products 208 times more often and 106 times faster than teams that don’t. This comes from a combination of small deployments, good workflow, and task automation.

By using solutions that support automation and new processes, teams can improve productivity and increase release frequency, while reducing potential errors and problems.

Thanks to automation, the product usually contains fewer bugs. And if they occur, the IT team can fix them quickly.

Bonus: IT teams can react to new customer needs in real-time and respond better in a shorter period to meet business goals.

As mentioned above, automation is an integral part of the DevOps methodology. But why?

Perhaps most obvious, automation lets you work faster and offload monotonous tasks from the team, which impacts your team’s efficiency. Automation also reduces bugs and errors made due to the so-called human factor caused by – among others – fatigue or oversight.

Automation is critical in DevOps when using a model that includes continuous integration and continuous delivery (CI/CD), as it requires rapid integration, building, testing. Plus, with CICD, deploying code changes needs to happen quickly, safely, and efficiently.

It is worth noting that automated testing is crucial here because it reduces the risk of introducing unstable or broken code into the production environment.

One of the best practices in the DevOps methodology is using serverless computing, which enables software development without needing server management. Maintaining and scaling the server infrastructure is on the cloud provider’s side. As a result, your team has more time to work on the code.

If you don’t want to use your own servers, then a private cloud is the solution that provides flexibility, scalability, and resiliency.

Cloud-native applications can be quickly built and deployed by small dedicated software development teams on platforms that can run on any hardware. They can also automatically scale up and down as needed.

Cloud solutions generally operate on an on-demand model, meaning that if a feature isn’t running, you don’t have to pay for it. This ensures cost optimization and saves money.

Microservices allow you to create and deploy applications tailored to meet modern cloud requirements for flexibility, scale, and reliability. The application is decomposed into independent components that work together to deliver the application’s overall functionality.

Containerization enables applications to run in isolated user spaces, where each container is a separate running application using the same operating system. A container looks and runs like newly installed software, but scales faster and more efficiently to the resources it contains.

With containerization, DevOps teams can focus on their priorities: The Ops side preparing containers with all dependencies and configurations, and the Dev side efficiently coding the software.

In DevOps, monitoring involves overseeing the entire software development process. It includes planning, development, integration, testing, and launching the application, and can involve a comprehensive and regular overview of the status of applications, services, and infrastructure in the production environment.

Essential application and service monitoring elements include real-time streaming, historical data playback, and visualizations. This allows teams to react quickly to any potential errors and problems.

GitOps are standards for managing application infrastructure and configurations using Git for version control. It provides automatic management of infrastructure provisioning and deployment.

The resulting repository contains the entire state of the system. This means all changes are both visible and auditable.

Sometimes it’s a good idea to roll out code gradually to see if your users respond well to the new changes. Many companies do this using a canary release strategy.

You can also use feature management and feature flags, which allow your team to configure and control the availability of specific features. To do this, you can use a proven and secure solution, such as Unleash, that enables you to roll out each new update providing consistent behavior. All you need to do is choose the cohort of users.

These solutions improve application performance while allowing developers to make changes and improve the application continuously. What’s more, they will enable you to minimize the risk of potential bugs and quickly deploy fixes.

Looking for a solution to make your DevOps team more efficient? There’s a good chance Unleash has what you’re looking for. Get in touch with our sales team to learn more.

How canary deployment is fast, powerful, and good for your users

How To Implement Trunk-Based Development? A Practical Guide